Introducing the Awardees of the 2016 Staff Awards for Outstanding Service

RAMS is delighted to announce the awardees of the fourth annual Staff Awards for Outstanding Service!

To be considered for this recognition, anyone working at RAMS may be nominated by anyone within the agency. The awardees were announced during the July 2016 RAMS all-staff meeting; each awardee received a certificate and a cash prize. 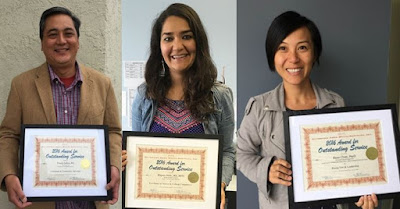 Consumer/Community Advocate Award: This award honors an individual who has been an outstanding voice for consumer empowerment by promoting client centered decision-making & change, access to information & resources, and creating relationships that foster hope, safety, and a sense of self-efficacy. S/he is mindful not only of consumer needs, but also of the needs of the larger community. S/he goes above and beyond the “call of duty”, outside her/his regular responsibilities to advocate on the behalf of the organization, consumers, their communities, and the “cause” at large.

Awardee: Frank Isidro, BA
Mr. Frank Isidro serves as a Peer Supervisor within the Division of Peer-Based Services. His nomination highlighted the ways that Frank has exemplified what it means to work with a Wellness & Recovery approach. In his role, he supports Peer Counselors to further develop the skills needed to become an integral part of the workforce at numerous behavioral health sites throughout San Francisco. Frank is an inspiration for those who work with him; he has contributed in many ways over the years to the Peer Movement and to consumer employment services in the city – as a job coach, mentor, counselor, and supervisor. Frank has also led the planning of many Consumer and Family Member Conferences, again demonstrating his dedication to the community.


Excellence in Service & Cultural Competency Award: This award honors a skilled & compassionate individual who exemplifies the values and ideals of RAMS’ mission in her/his work & interaction with staff, consumers, and the community. S/he has given superior, sustained commitment to quality services, along with unwavering dedication to serve the organization (including other staff, consumers & their communities) with professionalism, integrity, respect, and humility. This individual is not only skilled at what s/he does, but also values diversity, is able to conduct self-assessments, manage & embrace the dynamics of difference, acquire new cultural knowledge, and adapt to the cultural context of the people s/he serves. S/he has a lasting positive impact on the organization and the communities.

Awardee: Wajma Ataie, MA, MFTI
Ms. Wajma Ataie is a bilingual Mental Health Counselor at RAMS Child, Youth, and Family Services (CYF). Wajma is described as having a huge heart and an excellent advocate for the families and children she works with at her John Muir Elementary School. She is dedicated to understanding the culture and family climate a child comes from and she uses her multiple language skills to connect with families and help them feel supported. Yuka Hachiuma, Director of CYF, also shared at the all-staff meeting how Wajma has consistently demonstrated her passion and dedication to working with the underserved population of pre-dominantly African-American and Latino students and their families at the school. Her openness and curiosity extends to her interactions with her colleagues where you can often find her engrossed in a discussion about culture and learning.

Rising Star/Leadership Award: The award honors an individual that has shown exceptional promise in leadership by demonstrating their skills within the organization and our communities. S/he has shown accomplishments in improving the operations of a program, the administrative/supportive functions, and/or the lives of consumers and community we serve using an effective and efficient approach. This individual leads the way with fresh energy, strong ability, and steadfast commitment.

Awardee: Flora Chan, Psy.D.
Ms. Flora Chan is a Licensed Psychologist and serves as Clinical Manager at RAMS Adult/Older Adult Outpatient Services Clinic and the Manager of Asian Family Institute. Flora is a major figure at RAMS, and has a long history with the agency as a clinician – she completed the RAMS training program first as a trainee and then as a doctoral intern. She was then hired as a staff therapist, became a licensed psychologist, and has supervised trainees and peer counselors. In her nomination, Flora is described as an exceptional therapist who is very thoughtful, sensible, and culturally sensitive, with a strong commitment to the community, humility, resiliency, and she has an exceptional ability to connect with others. She cares significantly about providing high quality care for our clients and facilitating a nurturing work environment for staff and interns. She is an advocate, always steps up, demonstrates leadership, gets people on board, and makes change.

Congratulations to the awardees! RAMS is pleased to be able to have this annual recognition for its staff.

Click HERE to view awardees from the previous year.
Posted by RAMS at 7/19/2016 No comments:

Funded by the Mental Health Services Act (MHSA), the Peer Specialist Mental Health Certificate Entry Course provides a 12-week long training for consumers of behavioral health services or their family members who are interested in becoming peer counselors/peer specialists in the field of community behavioral health. Having already successfully completed 12 cohort cycles, this course has had over 160 graduates, the majority of whom are actively engaging in work, volunteer, and educational opportunities as a direct result of taking the course. This program is free of cost for the attendee, with books and materials included, and a modest stipend is provided upon completion of the course.

We are looking for individuals who:


Please feel free to contact us at (415) 579-3021 x102 or certificate@ramsinc.org should you have any questions. Materials are also available for download at: http://www.ramsinc.org/peer.php.

We look forward to receiving applications for the Fall 2016 class, and beginning another great cohort!

To view the flyers below, right-click and select any option to "Open". 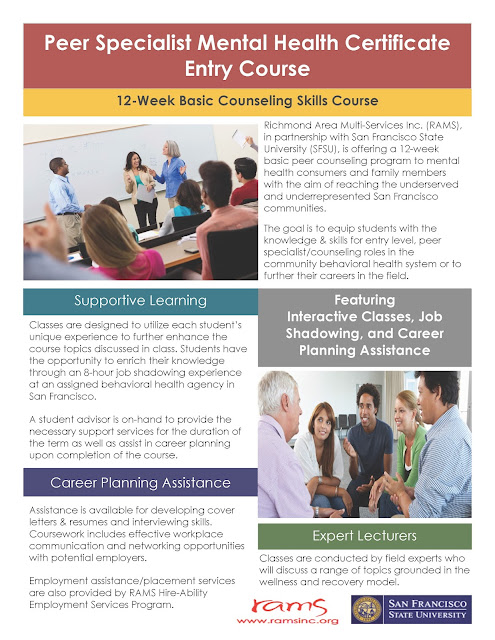 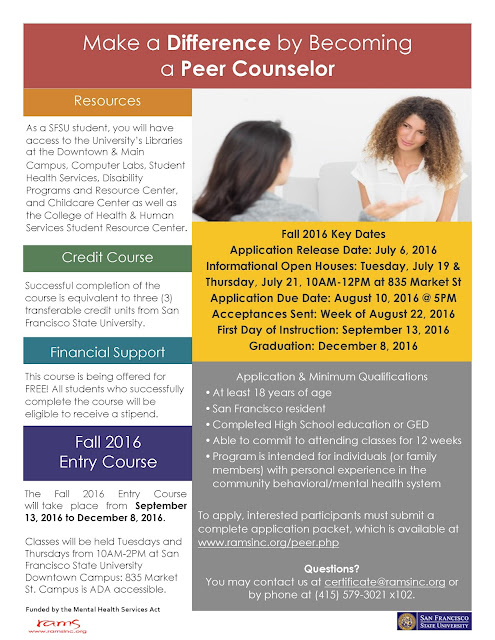 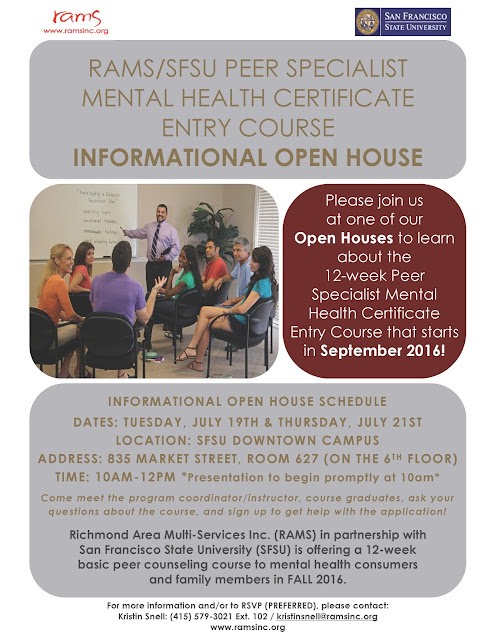