Funded by the Mental Health Services Act (MHSA), the Peer Specialist Mental Health Certificate Program (part of the Division of Peer-Based Services at RAMS) provides training for consumers of behavioral health services or their family members who are interested in becoming peer counselors/peer specialists in the field of community behavioral health. In addition to the Peer Specialist Mental Health Certificate Entry Level Course that is currently offered, RAMS has designed its Advanced Course to support and educate individuals who are providing, or have recently provided peer-based services to clients in the community (or possess relevant training, volunteer and/or educational experience), and would like to obtain more specialized peer counseling training and professional development opportunities.

We are looking for individuals who: 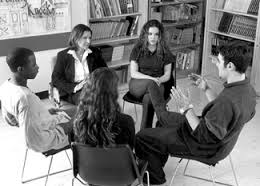 Please feel free to contact Program Coordinator, Kristin Snell, at (415) 579-3021 x102, or via email at kristinsnell@ramsinc.org should you have any questions or would like any additional information.
Posted by RAMS at 11/17/2015 No comments:

Community Voices: Stories From The Frontline

All RAMS staff, interns, and trainees are invited to this presentation & discussion at the 10th Annual Evelyn Lee Diversity and Cultural Competency Training:

This presentation will describe grassroots efforts for community and capacity building, strategies for advocacy and community empowerment, and engagement with leaders and legislative groups.

Robert Okin, MD was chief of service at SFGH Department of Psychiatry; professor of clinical psychiatry at UCSF; and vice chair of the UCSF, School of Medicine’s Department of Psychiatry, where he oversaw the development of crucial services for San Francisco’s most acute & chronic patients with mental health conditions, including the SFGH Department of Psychiatry’s culturally focused inpatient units and Emergency Department Case Management Program (which received the National Association of Public Hospitals and Health Systems’ Safety Net Award in 1999). He has been quoted numerous times in the New York Times, was featured on ABC’s 20/20, and in 2009, he received the American Psychiatric Association’s prestigious Human Rights Award.

Gordon Chin, MSW is the founding Executive Director of San Francisco’s Chinatown Community Development Center, serving in this position until his retirement in October 2011. He has been active in San Francisco’s Chinatown community for over four decades, and has served on many community and civic boards including the national boards of the Center for Community Change, the National Coalition for Asian Pacific American Community Development, and the SF Public Utilities Commission. Mr. Chin was selected as one of six inaugural fellows for the Fannie Mae Foundation’s James A. Johnson Community Fellows Award, and was one of the community development leaders honored at the Local Initiatives Support Corporation’s Silver Anniversary with a Mike Sviridoff Leadership Award.

To view the flyer below, right-click and select any option to "Open". 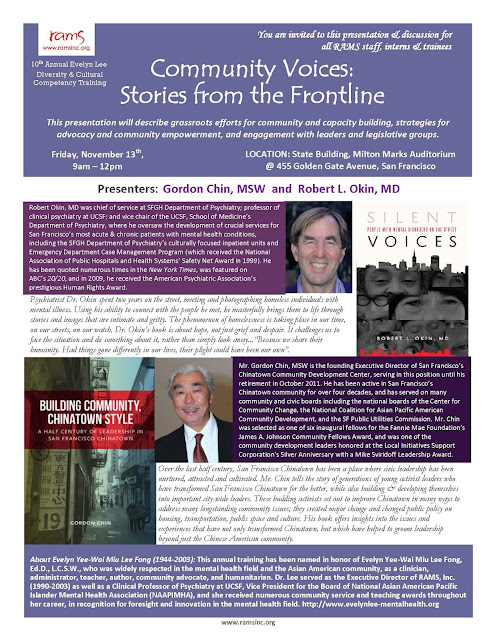