Join us at NAMIWalks!

The National Alliance on Mental Illness (NAMI) is the nation's largest grassroots mental health organization working at the national, state, & local levels to raise awareness and provide essential and free education, advocacy and support group programs. Every year, the local NAMI affiliates in the Bay Area work together to create the AnnualNAMIWalk SF Bay Area to raise awareness for mental illness and raise funds to underwrite and support much-needed free local programs.

To view flyer, right-click and select any option to "Open": 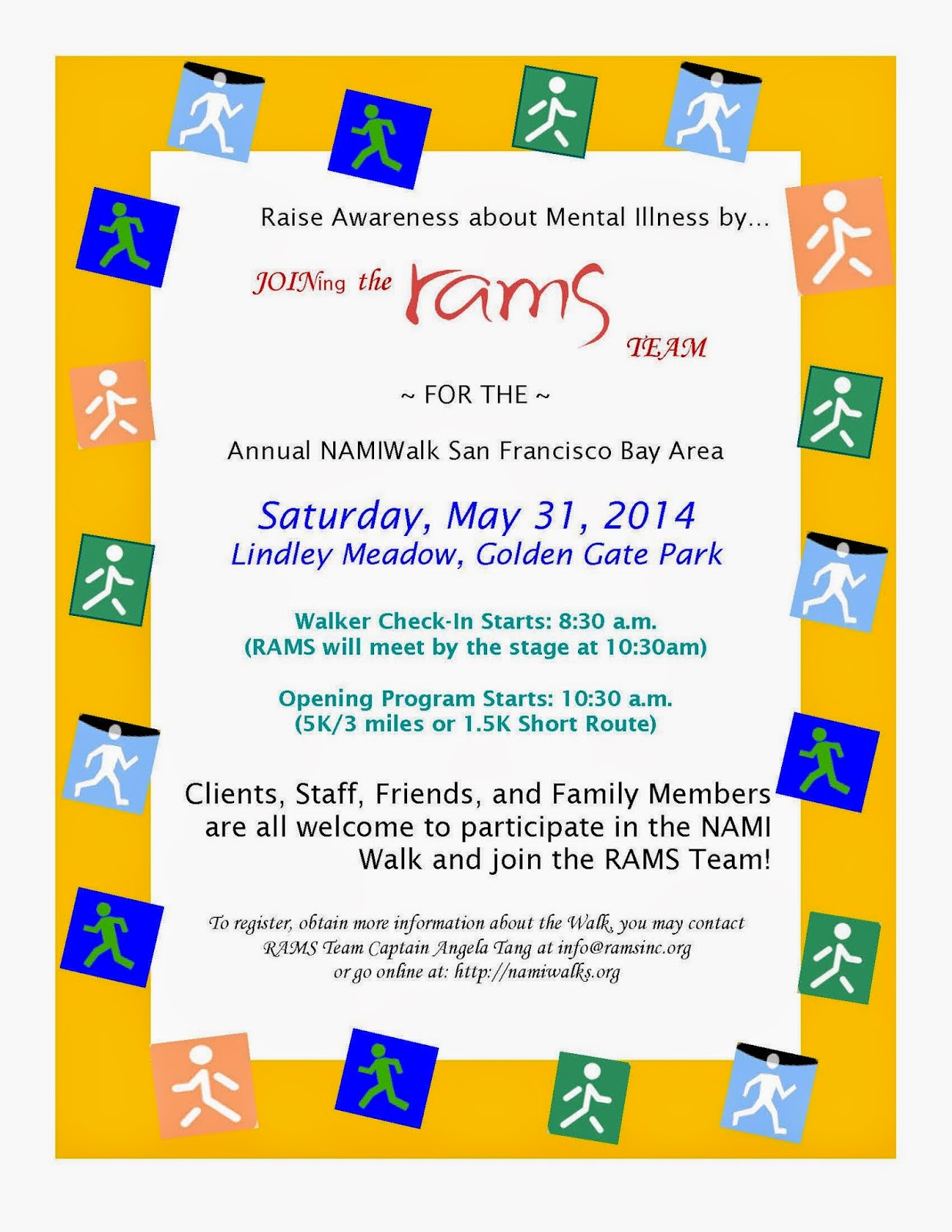 Please see www.namiwalks.org for more information about this great cause.
Posted by RAMS at 5/27/2014 No comments:

Mental Health Awareness in May

In honor of Asian Pacific American Mental Health Day and May being Asian Pacific American Heritage Month and Mental Health Awareness Month, on May 10, RAMS is proudly partnering with Self-Help for the Elderly to hold two mental health awareness events focusing on outreach efforts to older adults.  Held at Self-Help for the Elderly sites, RAMS will facilitate interactive and engaging activities focusing on ways to maintain balanced mental and physical health.

There are been increasing recent studies and reports on the ongoing struggle of older adults and mental health issues.  The Surgeon General’s Call to Action to Prevent Suicide reports that amongst elderly women of all ethnic or racial groups, Asians have the highest suicide rate.  However, Asian Americans and Pacific Islanders have the lowest rates of utilization of mental health services among ethnic populations.  This may be due to the substantial stigma that exists, the great need to increase the workforce of culturally competent providers, lack of culturally responsive outreach/services, and the cultural & linguistic isolation of the community, family, and individual.  Many people believe that mental disorders are rare and “happen to someone else" however one in four adults are impacted by mental illness in the United States every year.  Many factors contribute to mental health concerns such as biological, life experiences (e.g. trauma), and family history of mental health conditions.  It is important that each person is aware of some of the warning signs and ways to support and help.

Additionally, during the month of May, RAMS is pleased to be engaged in a series of mental health outreach activities:
To view the  press releases below, right-click and select any option to "Open". 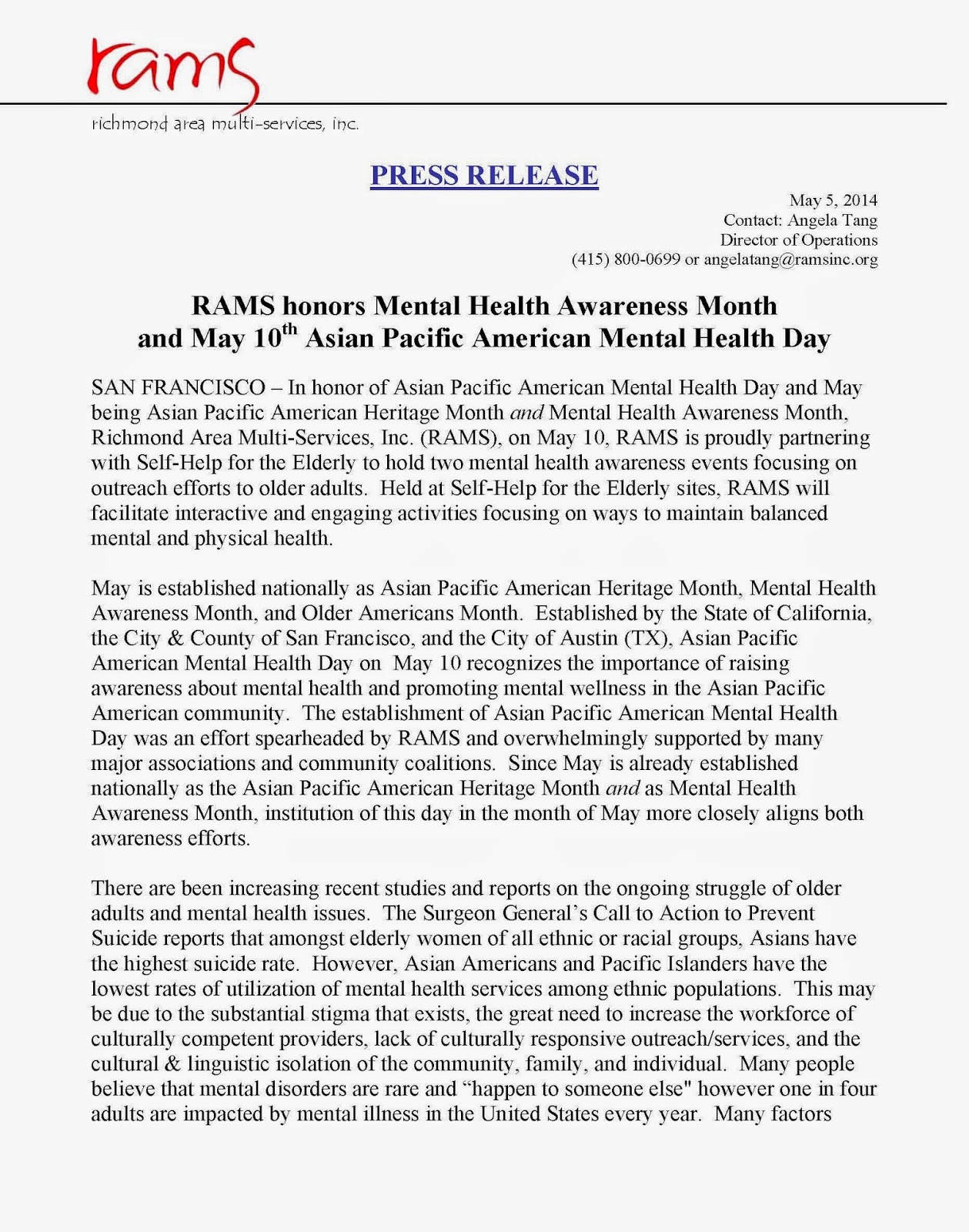 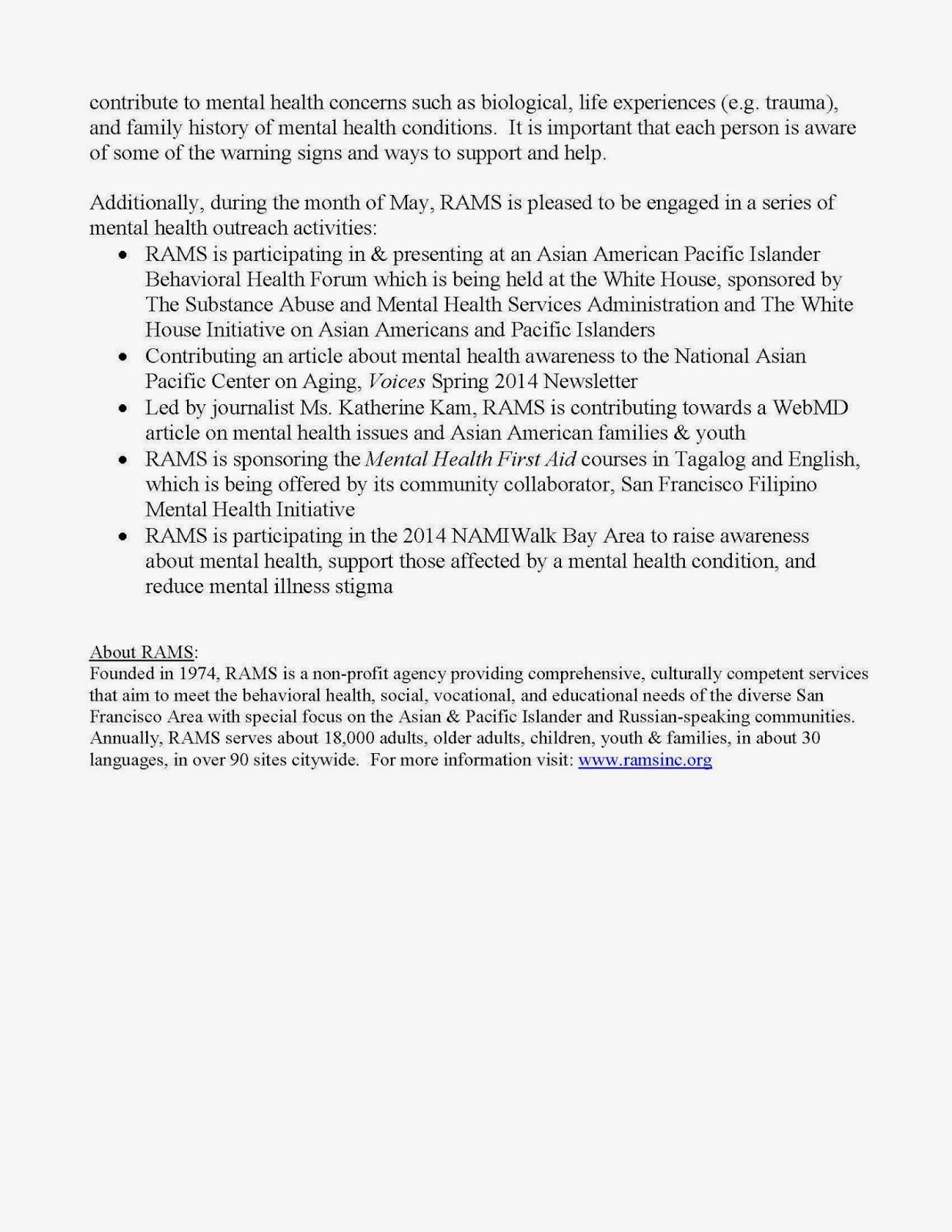