Once again, RAMS is very pleased to be a community supporter of the exciting & fun API Circle event, which will be held as a closing night celebration for APA Heritage Month. After very successful events in San Francisco and Oakland, API Circle is heading down to San Mateo for the next gathering!

You can definitely expect the same features …
And there will be no cover charge!


Festive ethnic attire is encouraged but business, business casual, or even just casual are fine ... come as you are!
See you soon - and please remember to invite your friends to join in too!


The API Circle is an alliance of San Francisco Bay Area Asian & Pacific Islander American leaders and organizations with the mission to create meaningful relationships and collaborative efforts that are cross-generational, ideologically neutral and diversely representative.
Posted by RAMS at 5/30/2012 No comments:

Email ThisBlogThis!Share to TwitterShare to FacebookShare to Pinterest
Labels: Announcements

A Story from Bonnie Youn

Following Mr. Ramey Ko courageously sharing his story, Ms. Bonnie Youn shares her inspiring story in recognition of Asian Pacific American Mental Health Day. Thank you to both for putting yourselves out there & making a difference!

Trauma, Grief, and Loss... and Wellness

In times when groups of students are affected by community violence, grief and/or loss, RAMS provides Trauma, Grief & Loss Counseling to provide roving crisis support as part of the Wellness Centers Program therapeutic services at the high school sites.

Our counselor is able to provide debriefing, short to long term support groups, trainings to parents & teachers, and clinical consultation to other providers. We are pleased to share the “data snapshot” about our positive impact on addressing the trauma, grief, and loss that high school students have experienced as well as how we have supported them in the process of healing & growth.

View the document by clicking on the image below to enlarge (right-click and select any options to "Open"). 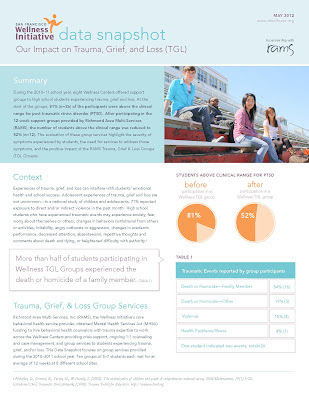 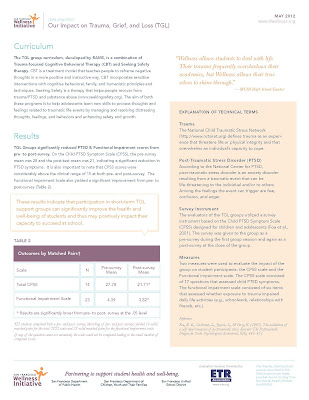 Join us at NAMIWalks

The National Alliance on Mental Illness (NAMI) is the nation's largest grassroots mental health organization working at the national, state, & local levels to raise awareness and provide essential and free education, advocacy and support group programs. Every year, the 9 local NAMI affiliates in the Bay Area work together to create the Annual NAMIWalk SF Bay Area to raise awareness for mental illness and raise funds to underwrite and support much-needed free local programs. 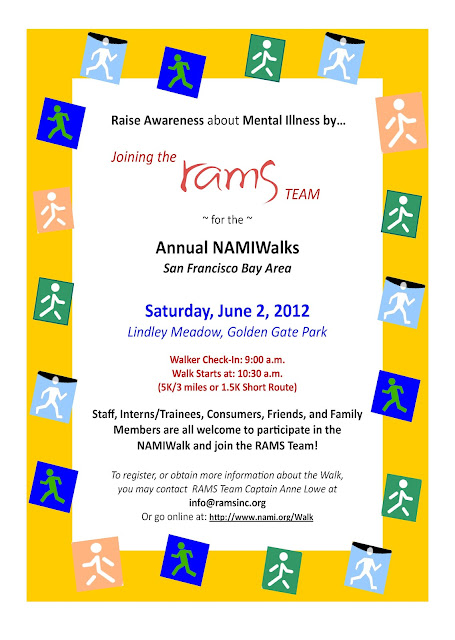 RAMS is pleased to participate in the Annual NAMIWalk SF Bay Area on Saturday June 2, 2012 to show support and help raise awareness around mental health issues. Please see: www.nami.org/walk for more information. Contact RAMS Walk Team Captain, Anne Lowe, if you are interested in joining us on this walk!
Posted by RAMS at 5/21/2012 No comments:

A Story from Ramey Ko

Mr. Ko is currently a Commission Member of the White House AAPI Initiative, and is a current Associate Judge of the City of Austin Municipal Court.  Click HERE to read his bio.
Posted by RAMS at 5/10/2012 No comments:

From all of us at RAMS, to all of our friends, supporters, clients, and community members.  We wish you good Mental Health for the coming year!
Remember, Friends Do Make A Difference!
Posted by RAMS at 5/10/2012 No comments: 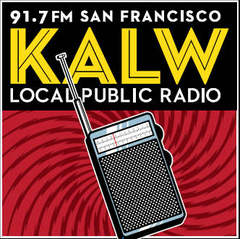 This first story shall feature a Q&A session as well as a profile of a family struggling to find care for their daughter, and shall re-air on May 10th at 8:50am during the Morning Edition.  The second story, about depression, suicide, and treatment for Asian American women, shall be airing on May 22nd at 5pm.  The third story will cover treatment and access to care for San Jose's Cambodian community (air date to be confirmed, as of this writing).

RAMS is honored to have been asked to contribute and assist in the making of this noteworthy program.  The entire series can be heard on air at KALW 91.7FM, but will also be available online at www.kalw.org.
Posted by RAMS at 5/08/2012 No comments:

A Letter from Congressman Honda 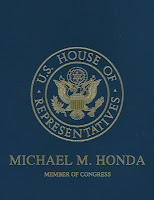 
View the letter by clicking on the image below to enlarge (right-click and select any options to "Open"). 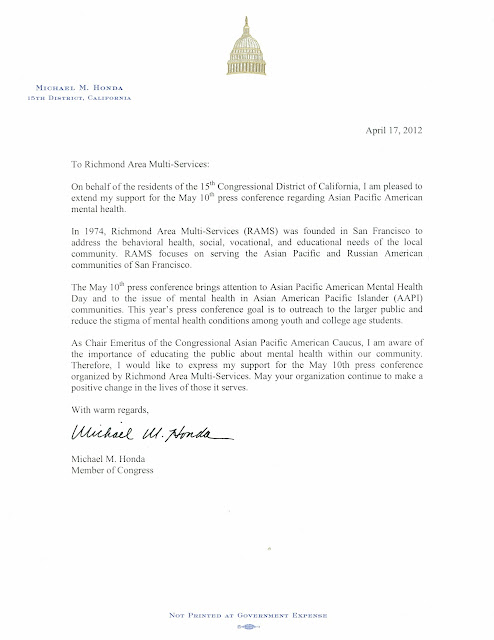 SAN FRANCISCO – Richmond Area Multi-Services, Inc. (RAMS) is proudly joining many others in the community to honor “Asian Pacific American Mental Health Day” on May 10th, as first established in 2010 by the State of California and the City & County of San Francisco, to recognize the importance of raising awareness about mental health and promote mental wellness in the Asian Pacific American community.


Approximately 25% of Americans in a given year are impacted by mental health conditions regardless of gender, age, race, religion and socioeconomic status, according to the National Institute of Mental Health (NIMH).  Asian & Pacific Islanders (A&PIs) specifically make up one of the fastest growing ethnic communities in the United States, yet they have the lowest rates of utilization of mental health services among ethnic populations, which may be due to the substantial stigma that exists (since many individuals and families remain in denial or silence about their situation) as well as cultural & linguistic isolation of the community, family, and individual.  A&PI girls have the highest rate of depressive symptoms of any racial/ethnic or gender groups, according to a study released by the National Alliance for Mental Illness (NAMI, February 2011).  A&PI women ages 15-24 have also been shown to have a higher rate of suicide than Caucasians, African Americans and Latinos in that age group (Center for Disease Control and Prevention/National Center for Health Statistics).  According to another study, A&PI college students report higher levels of depressive symptoms than white students (NAMI 2011).  These disparities indicate the critical need to raise awareness & talk about mental health, de-stigmatize seeking help, and increase access to & support culturally competent services for the Asian American & Pacific Islander community.

In the honoring of Asian Pacific American Mental Health Day in 2012, RAMS is pleased to be collaborating with the National Asian American Pacific Islander Mental Health Association (NAAPIMHA), and its partner interTrend Communications, in their national Friends DO Make a Difference campaign.  This creative and collaborative outreach effort will provide and distribute messages that focus on the importance and power of being a friend for someone facing mental health challenges. This project grew out of the successful What A Difference A Friend Makes campaign, created by the US Department of Health and Human Service’s Substance Abuse and Mental Health Services Administration (SAMHSA).  With the support and encouragement of SAMHSA, this project has tailored the message, art work and approach of the SAMHSA campaign to make it relevant to Asian American, Native Hawaiian and Pacific Islander (AANHPI) students.  RAMS will focus on outreach to the youth population and help to pilot this project among high school students in San Francisco. 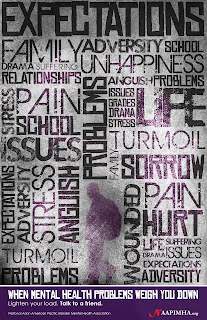 Please join us at a special event on this day.

George Washington High School, a four-year comprehensive San Francisco public high school dedicated to the philosophy that every student entering its halls has the right to an education to maximize his/her potential


The establishment of Asian Pacific American Mental Health Day was an effort spearheaded by RAMS along with California State Senator Leland Y. Yee, Ph.D. and San Francisco Board of Supervisor (District 1) Eric Mar.  It was overwhelmingly supported by many major associations and community coalitions.  Since May is already established nationally as the Asian Pacific American Heritage Month and as Mental Health Awareness Month, institution of this day in the month of May more closely aligns both awareness efforts.
Posted by RAMS at 5/04/2012 No comments: