Please join RAMS and other community organizations for the last Asian Pacific American Heritage Month event of 2011!  This inter-generational multi-ethnic event shall feature live performances, happy hour specials all night, announcements, and delicious ethnic food. All are welcome so please help us spread the love by inviting your friends to attend too!
RSVP: http://apahmclosingnight.eventbrite.com/

WHAT: APA Heritage Month Closing Night Celebration
WHEN:  Tuesday, May 31, 6:30-9:00 p.m.
WHERE: Carnelian By the Bay, 1 Ferry Plaza (behind the Ferry Building), San Francisco.  Close to Embarcadero MUNI/BART.  $5 valet parking. 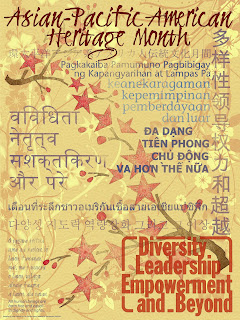 Poster by Defense Equal Opportunity Management Institute
Posted by RAMS at 5/30/2011 No comments:

Following a presentation by Patsy Tito, Executive Director of the Samoan Community Development Center, on the importance of CDBG funding to API communities, Rep. Pelosi acknowledged that the CDBG program must be protected because it forms the underyling foundation for critical local programs.  This is particularly true in San Francisco. CDBG funds nearly every API serving non-profit in the city of San Francisco. These services range from affordable housing to senior, youth, and family support programs.

Leader Pelosi also supported the priority to defend SSI from Republican attempts to raid and deplete the program. Anni Chung, Executive Director of Self-Help for the Elderly, presented on behalf of the community groups, and pointed out that for many API seniors, over 90% of their income comes from SSI. 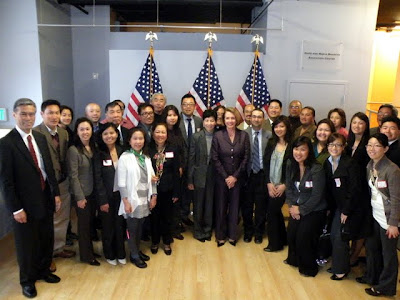 RAMS Peer Specialist Mental Health Certificate Program was invited to present at the Mayor's Disability Council meeting which took place on Friday May 20.  The topics discussed at the meeting were on Mental Health Issues, Peer Leadership, and Peer Support.  Christine Tam, Program Coordinator, gave an overview of the program's history and how it was created, student demographics, the current status of the program, and the successes experienced by the students in the program during their class experience and after graduation.
Posted by RAMS at 5/23/2011 No comments:

A Week of Mental Health Awareness

Monday, May 9:  The College of San Mateo presented an Asian Pacific American Mental Health Awareness Panel, featuring a panel presentation from RAMS staff about the importance of mental health and culturally-competent services in the A/PI community, working in the mental health profession, as well as challenges and issues specific to the A/PI communities.


﻿
As an added bonus for this auspicious day, ﻿the San Francisco Giants flashed the message "Happy Asian Pacific American Mental Health Day - May 10" on the AT&T Park scoreboard during the 3rd inning of the SF Giants vs. Arizona Diamondbacks game.  It was a winning game for the Giants as well!

Asian American Mental Health Facts:
• Approximately 25% of Americans in a given year are impacted by mental health conditions regardless of gender, age, race, religion and socioeconomic status (National Institute of Mental Health)
• Asian American girls have the highest rates of depressive symptoms of any racial/ethnic or gender group
• Asian American women ages 15-24 have a higher rate of suicide than Caucasians, African Americans and Latinos in that age group (Center for Disease Control and Prevention/National Center for Health Statistics)
• Asian Americans and Pacific Islanders appear to have extremely low utilization of mental health services relative to other U.S. populations (National Alliance on Mental Illness)
• Among elderly women of all ethnic or racial groups, Asian Americans have the highest suicide rate (Surgeon General’s Call to Action to Prevent Suicide)
• The economic cost of untreated mental illness is more than 100 billion dollars each year in the United States. Without treatment the consequences of mental illness for the individual and society are staggering: unnecessary disability, unemployment, substance abuse, homelessness, inappropriate incarceration, and suicide. (National Alliance on Mental Illness)
• The best treatments for serious mental illnesses today are highly effective; between 70 and 90 percent of individuals have significant reduction of symptoms and improved quality of life with a combination of pharmacological and psychosocial treatments and supports (National Alliance on Mental Illness)

The establishment of Asian Pacific American Mental Health Day was an effort spearheaded by RAMS along with California State Senator Leland Y. Yee, Ph.D. and San Francisco Board of Supervisor

Eric Mar. It was first established in 2010, as declared by the State of California and the City and County of San Francisco, recognizing the importance of raising awareness about mental health in the Asian Pacific American community.
﻿   ﻿

“Since May is already established nationally as the Asian Pacific American Heritage Month and Mental Health Awareness Month, instituting this day in May more closely aligns both awareness efforts,” says Kavoos G. Bassiri, President and CEO of RAMS, Inc.﻿
﻿
﻿﻿
Posted by RAMS at 5/10/2011 No comments:

Richmond Area Multi-Services, Inc. (RAMS) is reaching out to the California community to honor and recognize “Asian Pacific American Mental Health Day” on May 10th. The call for action is for community groups, organizations, coalitions, and associations; health advocates or individuals; and public officials & entities, public health departments, and other affiliates to acknowledge this day and the importance of mental health in the Asian Pacific American community by organizing an activity, making an announcement, and/or simply spreading the word to raise awareness.

Starting 2010, and each year thereafter, the State of California and City & County of San Francisco declared May 10th as Asian Pacific American Mental Health Day. This effort was spearheaded by RAMS along with State Senator Leland Y. Yee, Ph.D. and SF Board of Supervisor Eric Mar. Establishment of this day was overwhelmingly supported by many major local, statewide, and national associations and community coalitions. "Since May is already established nationally as the Asian Pacific American Heritage Month and Mental Health Awareness Month, instituting this day in May more closely aligns both awareness efforts," says Kavoos G. Bassiri, President & CEO of RAMS, Inc.

Approximately 25% of Americans in a given year are impacted by mental health conditions regardless of gender, age, race, religion and socioeconomic status, according to the National Institute of Mental Health (NIMH). “Given the traditionally low rates of mental health utilization within this [Asian American] community, it is our belief that the creation of day to promote greater awareness of the mental health issues facing various Asian American and Pacific Islander communities is a critical and much-needed act of advocacy,” stated Dr. Gordon Nagayama Hall, President of the Asian American Psychological Association.

In honoring Asian Pacific American Mental Health Day in 2011, RAMS is holding an all day training event “Asian Pacific American Mental Health: Knowing Our Roots and Growing Beyond” in San Francisco. The event features an exciting panel of presenters: Dr. Alvin N. Alvarez, Dr. Jean Lau Chin, Dr. DJ Ida, and Dr. Stanley Sue, and facilitated by Kavoos G. Bassiri. Joining the moderated panel discussion is also Dr. Leland Yee, Psychologist and California State Senator. The presenters are recognized leaders, trailblazers, and legends in the field of mental health and working with Asian Pacific Americans. This training is funded by Mental Health Services Act and offered to the community through a collaboration of RAMS and Harm Reduction Therapy Center - Training Institutes.
Posted by RAMS at 5/06/2011 No comments: 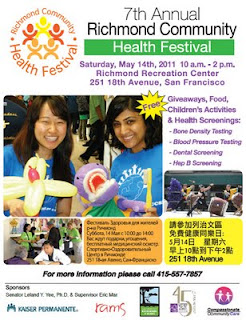 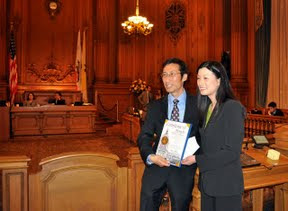 On May 3, 2011, in celebration of Asian Pacific American Heritage Month, the San Francisco Board of Supervisors honored one individual in each supervisorial district for “public recognition of distinction and merit for outstanding service”. We are proud to announce that Supervisor Eric Mar awarded RAMS Director of Operations Angela Tang, LCSW with a Certificate of Honor as the individual representing the Richmond District of San Francisco. Ms. Tang received commendation for her hard work and dedication with over six years of service at RAMS, and for her commitment to serving the Asian American community in the Richmond District, and the greater San Francisco area.
Please join RAMS in congratulating Angela Tang for this great honor, and in congratulating and celebrating all 11 honorees of the various San Francisco districts!
Posted by RAMS at 5/03/2011 No comments: